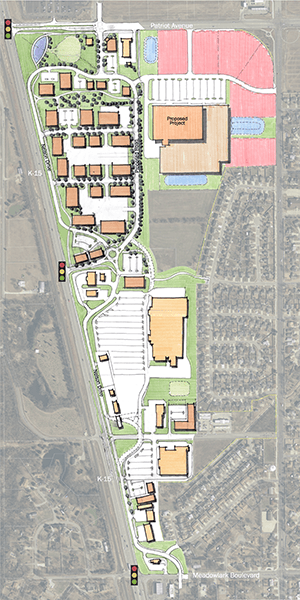 The K-15 Area Plan encompasses the area generally along the east side of Highway K-15, from Patriot Ave. south to Meadowlark Blvd. The purpose of this project is to assess the existing strengths and weaknesses of the area, identify barriers to development, and present opportunities to improve the area's economic vitality.

A culmination of two years of work between the City and consultants RDG Planning & Design and WSP as well as numerous stakeholders and citizens of Derby, the plan was approved by the City Council in January 2019. The plan will be adopted into the Comprehensive Plan Update, scheduled to be completed in 2020. The plan provides a framework for redevelopment of the area and reflects the goals and desires of the City, the land and business owners and area residents.

A preferred design concept was created and introduced to the public in November 2017. The concept was well received and served as a model going forward for the plan.

The preferred design concepts include:
Additional recommendations include:
Plan implementation will require investment both public and private. Design and construction of improvements to support redevelopment will be considered as part of the budget process and programmed in the Capital Improvement Plan (CIP).
The City Council has made it a priority to further assess the needs of the plan area in order to identify a development strategy that will keep the area a viable commercial sector of the City, improve traffic safety along Highway K-15, and enhance aesthetics and property values within the plan area.