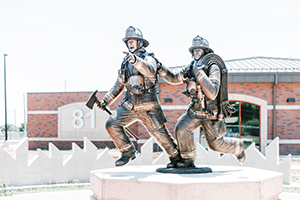 A city’s architecture, public art, and landscaping reflect its values. Visitors to Derby often comment on its beautiful green spaces. Recent park additions of Madison Avenue Central Park and Warren Riverview Park have added to the local landscape.When the new Fire Station 81, located at the corner of Madison & Woodlawn, opened on July 5, 2019, it was a welcome addition as well as the new bronze sculpture, Answering the Alarm.

Answering the Alarm was created by Derby artist John Parsons. Parsons was commissioned in April 2017. He created a small, approximately 28-inch clay model of his concept, based on discussions with Derby fire personnel. Several items of firefighting equipment were provided to ensure exact measurements were used. When the full-sized piece was completed it was taken to Colorado to produce the bronze statue. The entire process took a little more than a year. The sculpture is in front of a “wall of fire” light feature and surrounded by landscaping to further the growing beauty of Madison Avenue and solidify this core area of Derby as the heart of the city.